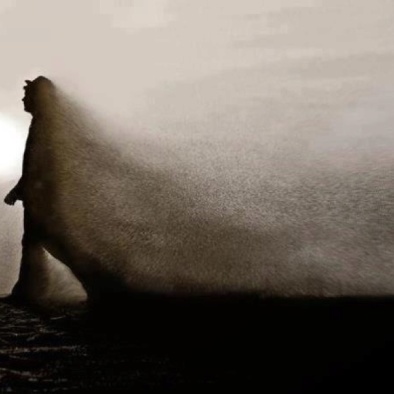 Today I met my cousin after a long time, and the conversation we had seamlessly flowed from topic to topic on auto-pilot.
I was barely conscious in the whole of the conversation that transpired, it just flowed spontaneously and I was dimly witnessing the happening with very little control or consciousness of it.
These kinds of dissociated blank states happen a lot to me, esp. when I am engaged in a conversation.
Suddenly I lose consciousness of the entire context, and I feel like my memory is wiping out and refreshing every second as I speak.
Like to keep writing on water and watching your writing disappear spontaneously as you write, but yet keep writing without any plan or consciousness of the goal or context.
This always puzzled me, this state of consciousness that is.
Later after the 3 hour conversation, I wrote down everything I chatted about and it seemed to make sense in retrospect.
I felt the urge to run through the whole conversation in my mind and correctly contextualize the whole thing into my memory framework.
I often do this and resolve incomplete memories by retrospective analysis.

So I wanted to create a map for these kinds of experiences of dissociation and a loss of consciousness.
Generally when we lose consciousness, we assume we will just faint and fall down.
But this is not necessarily the case.
There are a lot of cases where our consciousness goes dim but yet that does not stop interactions and movement from happening.
Take the case, when you are crazy drunk, so drunk that the pyramidal cells in the brain are stopped from encoding to long term memory. In that situation, you move, talk, laugh, have a lot of emotions and conversations, but it is all spontaneous without any ego presence.
These are times, where things happen, but your story-making/contextualizing apparatus is offline.
The most scary version of this might be the date-rape drug or datura, which causes you to lose all will power and simply comply blindly.

I have had these experiences happen even on weed, when there is total absorption into music, so much, that when the song ends, you forget that you even heard a song and it feels like the song lasted an eternity.
Another example of this would be skydiving – that one minute fall was so immersive, my ego/contextualizing/story-making apparatus went offline during the 1 minute fall. So the fall felt like just a few moments vs. a full 60 seconds.

These experiences have always disturbed my ego/central narrative making/story making apparatus.
These events represented holes in my ego control.
Generally prospecting the future requires holding a lot in memory, we prospect the future from this memory base.
For instance if you are playing chess, to decide your next move and plan/strategize requires you to use a lot of your memory.
Imagine if you looked at the position of one chessboard piece, and then as you moved your eyes to look at the next piece, you forgot the position of your first piece, how would you ever strategize how to make the next move?
It takes an incredible amount of working memory to play.

Earlier when I had a strong ego narrative going, all my actions were much more top-down.
In the sense all my actions would be mainly determined by my central practices and goals.
Nowadays, that central narrative has thinned out so much, I find myself in a chaos, a state much closer to a incoherent dream, with various snippets of coherent meanings arising and passing with no central unifier.

So nowadays, events happen by themselves with little consciousness from my side, and then I reflect and write about it later on – extracting insights, weaving the story thread and so on.

Another interesting connection is between will-power and memory.
The lowering of memory (holding on) fades away will-power in equal measure.
The self/ego is memory. And will power is a function of this.
So memory is the key stone here.
Remove memory and all vanishes.