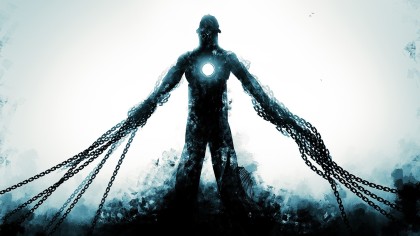 Say you are a child.
And your parents were over-controlling, over-protective, over-bearing, over-intrusive, dominating, smothering, suffocating, over-powering, and infringed on you in EVERY POSSIBLE WAY.
Say they imposed tyranny on you, threatened you in all sorts of ways (psychological, mental, physical), played all sorts of emotionally debilitating games, and constantly used guilting and shaming to get you to comply.
Let’s say, whenever you raised resistance they decried it, minimized it, laughed at it, brushed it away, denied it, gas-lighted it (mind-gaming, perception-blaming), performed circular arguments, somehow twisted the blame back to you, guilted you for even raising resistance, mind-gamed you into thinking it was unreasonable and actually your fault, and so on.
Imagine, this was taken a level even further and you were physically beaten into submission as brutally as possible, until you were filled with nothing but fear and terror.
Supposing they opposed your every attempt to individuate yourself or separate yourself from them, and thwarted every such effort on your part.
Say, they always wanted you to be their slave(but they would never admit this), and fit their image, and be exactly the way they want you to be (a clone of them or living up to their ideal/role/expectation), and always be under their control.
Now, let’s add to the suffering. Supposing you had a sibling whose only mission in life was to compete with you and actively and violently suppress all of your expression and minimize everything that you can possibly do.
Would this not be an EXTRAORDINARY hostile environment for you to grow up in?
Would not your life purpose become just about emerging from all these hostile forces and gain the most basic of freedom and liberty?

When a child is faced with this sort of debilitating, imprisoning, torturous, blind, abusive, crippling, stifling, controlling, maddening, and disabling environment, he shrinks in terror and seals oneself off from relationship (killing off the possibility of love).
In this heart of darkness (like a dark prison cell with a window), the child looks out at the world from the grilled window.
This dark cell the child creates is the protective cover of the heart against this level of assault and it permanently seals off many many possibilities of relationship with the world.
The dark cell always serves as a reminder and houses all the traumatic memory in its very walls.
Every time these situations were faced, tremendous rage and anger was aroused, as a protective system against the assault, but no amount of rage could do anything to stop it.
The child is absolutely powerless and helpless no matter HOW HARD he tries.
This sends him into a deep despair.
Should he fight to live? OR should he dissociate and just let himself die?
If the former option is chosen:
A super high degree of rage becomes the default mode of being because there is always a background of infinite threat against which one has to defend and fight.
An “extreme fear and defense/attack” disposition becomes the default against an infinitely threatening environment and others.
Life itself is then perceived as an ‘extremely hostile other’ that is out to destroy the child against which the child is woefully under-powered to fight.
This takes on archetypal/mythical levels of reality penetration, and thereafter the child will live his whole life in background FEAR AND TERROR – and live in a state of being ever-ready to violently fight at the most primitive levels.
The default mode of perception is of SUPERLATIVE THREAT and SUPERLATIVE DEFENSE.
The ATTACK is nothing but Pre-emptive defense.
Defense is the first goal and attack is from the hope of destroying the threat so that one can do away with the NEED AND PREOCCUPATION AND FEAR about defending.
This leads to compulsive power seeking which can take on multifarious forms such as – physical domination, emotional domination, intellectual domination, social power and status seeking, and so on.
If the latter option of death is chosen:
It could also take on the reverse side of seeking to submit/surrender/give up/self-abnegate/die because that also ends the conflict.
Both the choices of:
Extreme fight ——————- Extreme surrender
They both look like opposites, but the unity in them is that, both endeavor to END conflict, and “suffering” is always from conflict.
The child may alternate too between the 2 options:
Rage at one time —————– Feel depressed and empty at another
Ultimately, the more the child deeply sees and looks into the matter, a lot of dross falls away, and it leads to singular truth seeking.
What is the truth of existence? Why is it so hostile to me? Am I guilty of something? How am I to ever emerge from this hellish circumstance? How can I heal this? Should I fight to live or just resign and die?
This kind of metaphysical preoccupation plagues the child’s mind.
He can never invest in anything like ordinary people do, because his heart carries all the frightening memories of evil that keep voiding all investments apart from temporary reprieves.
This may also take on a morbid obsession and a PTSD like repeating of the torturous memory like a constant repeating playback in the mind, in an attempt to somehow assimilate the experience memories.
Or the child when grown up may keep having a tendency to gravitate towards those very same super hostile circumstances, in an attempt to go beyond them.
He may obsessively seek self-improvement, self-empowering, or self-transcendence.

In this situation, I see no way out apart from taking apart that dark prison cell of the heart brick by brick, and developing more and more courage to see/accept/transcend what’s behind each brick.
That is the singular life purpose for such a child.