The brain on the right shows dopamine levels in normal circumstances when addicted and the left shows the normal version.

I read an article that talks about addiction not being a brain disease but more of an ‘Extreme form of learning’. Normally the dopamine rewards is released for good food, sex, social interaction etc. But here in the addiction case, all of the dopamine is redirected to the substance causing an extreme desire to have it. It is essentially a re-direction. We call it a disease and destructive more because this redirection may threaten the stability and structures of society as it is as of today. But even a mystic would be termed as disease by psychologists because of his relative detachment to things that people pursue. Psychologists are like the mental gatekeepers of our societal structure just like the police are physical gatekeepers. Their concern is first conformity and second your actual health and needs.

In fact, there is an interesting question about how do we define any disease – physical (pain), mental (ability, processing, fixation), spiritual (true values, desires). It is some kind of disharmony, conflict. Perfect harmony is perfect health.

Addiction is a far broader concept than what it is generally thought to be. Addiction is not just to drugs like alcohol, cigarettes, cocaine, heroin, chocolate, weed, sex, love, sugar etc. It could be for just about anything. It could also be for certain kinds of social interactions, movies, life, state of mind, control, ideas, conceptions, models etc.

For visualization purposes imagine addiction/attachment is something like the visible light spectrum.

I sometimes wonder what is the difference between attachment and addiction?
They both seem to be essentially the same spectrum.

It seems like disease is a concept defined in society based on a certain kind of functionality expectation. When a person is unable to function in his daily office job/socially etc. then we declare him as unwell or having a disease (mental or physical). But the question is, in the absolute reality, is disease really something ‘REAL’? OR is it more of an emergent property when the individual is not in harmony with the expectations and beliefs of his environment? Any dis-ease (as we term it) is ultimately just an experience. Anything out of the defined normal is called a disease and there are all kinds of interventions (antidepressants etc.) to forceabily get the person back into harmony/conformance with the dominant socio-cultural values.

So there is no such object called disease in absolute reality. Disease is more of an interpretation which happens when ‘What should be’ and ‘What is’ are compared. ‘What should be’ is again the definition of functional normality as defined by the dominant culture and the average collective level of consciousness. For a future human, our condition maybe a terrible disease and likewise we may view our ancestors as being terribly diseased.

So disease is not really something solid phenomena. It does not exist in the absolute sense. It is an input interpretation based on ‘X’ model and during our life we flip through many mental models ‘X’, ‘Y’, ‘Z’ etc. A disease in model ‘X’ maybe a blessing/insight in model ‘Y’.

It also opens up a larger question. That ‘All of reality is essentially input interpretation’ and interpretation happens through beliefs. So it would be quite accurate to say ‘beliefs determine reality experience’. When your belief structures are warped by psychedelics/contemplation on connections/kindness/impermanence etc., the same ordinary objects create profound religious feelings. Its as if the physical reality experience is a shadow of higher vibrational realms like the mind and belief centers.

Its as if beliefs are like the ozone layer and clouds which allow sunshine to hit the earth or not.

The sun (God, universal force, universal energy) is always shining. Each human could be thought of as planets dancing around the sun. Lets consider earth to be one such person. The stratosphere would be the deep subconscious. The troposphere, the pre-conscious. The clouds – our daily thoughts etc. So based on these layers only a limited amount of sunshine hits the earth. If all this is cleared or made transparent through the light of awareness (the sun’s light), then there is only light since it has penetrated everything and revealed their true nature.

In a sense, all of these layers can be called diseases. The more cut of you are from the light, the more desperate you become to find it. But is it really a disease? This is after all an experience and each experience is beautiful. It is one form among the infinite appearances that are possible in awareness. How can it be inherently bad from this perspective?

Also the distinction between mental and physical diseases isn’t really there. Mental patterns congeal onto the physical dimension of energy when repeated over a long period of time OR if highly intense. A physical pattern can cause a mental fixation and thereby cause mental suffering. 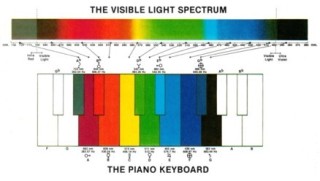 The body would be the slower vibration part of the spectrum while thoughts would be the higher vibration part of our ‘Spectrum of being’. Even higher in vibration would be the ‘I am ness’, ‘desire space’ and ‘belief space’. Manifestation in the lower physical spectrum can have its origin in the higher vibrational spaces like thought. Like the saying ‘Everything begins with a thought, an idea, a dream’. Also the reverse can happen. Physical pain (lower vibration) from a disease may make you change your beliefs (higher vibration). So the whole thing is one like the poles of a magnet – physical and mental realms. The interconnection is so complete that they both are really ‘ONE’. Thought influences the physical and the physical influences thought. Both physical and mental represent the one absolute being. Its just like how we call the whole band of electromagnetic spectrum ‘Light’.