Skip to content
I sometimes wonder, to solve any problem or to really satisfy a desire, we need to rise one level above it. We need to work towards a higher goal where the desire becomes a subset of it. That makes the accomplishment feel more effortless and you usually get more than what you even asked for.

For E.g.:
Desire: Want to be a helpful person and appear that way
Higher Goal: The goal would be that I would help any person who comes by to the best of my ability, taking into account the situation and myself, expecting no reward. The only reward being the intrinsic one i.e. the mental state in the moments of doing the help.

Desire: Want to move up the corporate ladder and gain respect.
Higher Goal: See the company’s higher mission and see its principles find any resonance in you. Do the work to the best of your ability w/o expecting immediate reward. The reward should be intrinsic i.e. the fact that you are doing the work with the most attention possible using the best of your ability is the reward. Whatever may be the work, there is infinite scope for improvement at greater levels of subtlety.

Desire: I want people to read this blog and appreciate me and find a new found respect for me.
Higher Goal: This blog is for inspire people to explore new ways of thinking and find new freedom and directions.
Even Higher Goal: I am writing this blog to share the evolution of my thinking w/o any judgment of right/wrong/good/bad. I want to share my life’s journey of this form of contemplative thinking. It is for this intrinsic desire to share my thoughts. Rest of the benefits are just added luxuries.

In colloquial terms, a man of principles is operating at a higher level in terms of his goals. If you notice, as one goes higher up in the goal ladder, the goal becomes less time oriented and more related to a state of mind. The goals also moves more towards permanency. It starts of with the external world and then the higher you go in terms of goals you reach the internal. Usually, as you move towards intrinsic, the external becomes more of a luxury. Its like you would get 70% satisfied just by the intrinsic reward. The remaining 30% can come from others’ appreciation and respect and its more like a luxury.

Look at all the great people like Albert Einstein, Leonardo Da Vince. Their level of thinking and goals were fundamentally different from what we can imagine. That is why they say, if your goal is only to win a Nobel prize, its unlikely you will because a goal like that simply does not have have that much energy.

Extending that logic, as you get move towards intrinsic, your energy to accomplish the goal becomes tremendously higher. I think the highest goal might be complete self knowledge, a permanent state from “moment to moment” and the goal may just simply be “self actualization at every moment” (maybe words cannot really convey this, just an attempt). This also explains the other proverb “Higher the goal, higher the energy”.

As you take up higher goals, the number of people available to identify with would decrease. For most people, their goals are mostly from getting from point A to B and they don’t really care about “Why”, they just know it at an extremely superficial level.

In other words, you shift your reward feedback from external to internal. Ultimately external reward is an illusion. All reward comes from within. The external system is just a catalyst. The problem is that, we don’t know how our internal system works. Its more like a black box. So we depend on external systems because they are tangible and more directly understandable. All drugs work on already existing chemicals/mechanisms in your brain and create those unique states.

Why do most children enjoy playing games? Even plenty of grown ups enjoy this. However I’ve often noticed that people in their mid-career quote “Ohh gone are those days when I used to play games. Now I’ve far too mature and developed to enjoy those things. I am embroiled in real life issues now. No more games”. This answer amuses me. Life itself is a gigantic 4-D simulator. The game of life and PC/console games mainly differ in their level of abstraction (to put it mildly). Even when we move from 2-D to 3-D space, the amount of complexity added is unbelievable. Just think a 2D plane consists of infinite lines in all directions. A 3-D space consists of infinite 2-D planes in all 3-axes and in infinite angles etc. The level of complexity added at each dimension is just mind boggling. That’s why probably the game of life is so compelling, its unusually difficult to identify that it is a game. I think the reason is the attachments we have to things that prevent us from seeing the real picture. That’s why detachment always helps in uncovering more and more objectivity in things and maybe reach a state where you are able to spot this illusion. Like a fish which slowly gets itself out of the water into air and when it gets back it realizes that “IT IS IN WATER”. The other fish would simply think nothing else exists besides water because everywhere they go, that’s all they find. I think that is probably the moment of enlightenment when you perceive that all the things that you think are so different are probably all from the same source. The formless, shapeless, nameless.

It is like an ontology where relationships are figured out between seemingly unconnected entities. The whole evolution of the semantic web basically tries to link everything together in some way as a web and add meaning to all the information floating in the internet.

I think identification with form is the illusion. Our subconscious minds think in images and our conscious mind thinks verbally. Both of these need to be transcended to break the illusion. At a more micro level, all we seek are mental states. We are attached to a lot of them and we spend our lives constantly trying to recreate them.

This ‘source’ may be impossible to explain in words since words are just an abstraction. The entire human language is just a system of abstractions of the real thing and it is still evolving. There is great scope. The next leap could be telepathic communication and even in that, to what depth it is possible etc. leaves huge potential.

Thus, once the source is discovered, everything emanates from that and therefore nothing is unconnected and you can truly understanding anything. You would know the a level of subtlety far far beyond norm taking you into another world. “Nothing in the world is absolute”, because the very instruments (our senses and mind) we use to observe can only uncover a tiny part of reality.

Look at these ontology diagrams for an analogy of what I me: 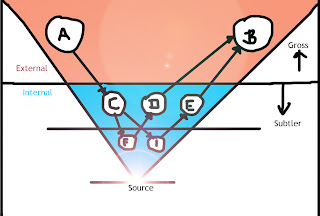 Can you ever really understand the relationship between A and B in the external reality(red portion) without understanding the internal part of it(blue portion)?. If you look only at the external side you might think they are very distinct entities totally unconnected. This could create strong dualities. For eg: (Good, evil), (pleasant, unpleasant) etc.
Would you call that true knowledge of A and B?

The total connecting paths are:
A to B = ACFDB, ACIEB

From the source, all these connections become visible. They may look completely unconnected in the external reality. That is why it is called true knowledge. It is the highest goal.