The analogy shown here is similar to that of iron filings orienting themselves to a magnet. The magnetic force here is what we may call will power. Using will power we direct all the neuronal energy towards a specific object. Perfect concentration would be when you become the object itself or feel that ‘you are the object’.

Jnana yoga talks about this in much greater detail.

Another way to look at breathing meditation is that, a surprising fact:  If you think about your hand, and at that instant or moment its there, before that you had no awareness it existed. If you choose to only think about the sensation of your right hand, then you would essentially only be your right hand, till you decide to change your thought. So in essence what this could mean is that, the body is just a machine which you are responsible for. So the “You” is not the body. What happens in deep sleep? your body is still alive during this period. I guess what we commonly refer to as “you” is our experience or observation of anything. I do not observe anything about my little toe until I have a thought about it/decide to think about/feel it. So the little toe is not me by definition.

At times while falling asleep we notice that we get lost in thoughts. During this period we have no awareness of the body until we snap back to it by a jolting sound etc. So we could assume, that you were too busy with the thoughts and not aware of the body at all. If extended further, you cannot be your thoughts since someone is observing the thoughts. So the “You” or “I” is something else altogether, maybe in some other dimension. It might just be pure awareness.

So, in breathing meditation I guess what we essentially do is gather all the awareness and focus it on the nostrils. 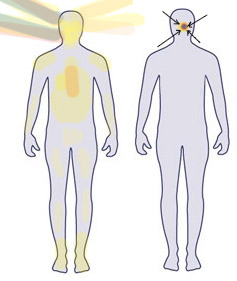 Diagram: Supposing the yellow, orange and blue represent increasing level of forces pulling the mind towards them. The blue might indicate some important college/office work pending, orange – wanting to eat something, yellow – just a faint feeling. In breathing meditation we relax the body enough that its signals become extremely subtle. This allows us to move all our attention to whatever part we want i.e. nose.

If this is mastered you have separated the concentration/awareness force from its objects. It’s like distillation of water. Preoccupations, desires are contaminants. Imagine the kind of power if this force is completed isolated. Almost all inventions of mankind were based on concentration. So you are isolating that force and you have complete freedom to use it wherever you want since you have freed it from all its obligations. Its like having a rifle in your hand when everyone else is fighting with sticks.